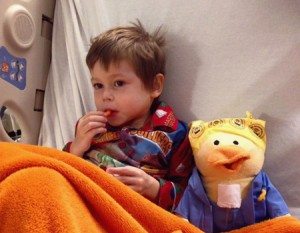 There is nothing like a boy and his duck. Just check in with five-year-old Kolton Platt.

Kolton and his Chemo Duck are inseparable, said his mom Amber Sanders Platt.

“When we went to have his port put in, a child life advocate came in before he left for surgery,” said Amber. “She showed him the Chemo Duck before he left for the procedure and told him it would be waiting for him when he woke up.

“Sure enough, when he got back to his room it was the first thing he asked for!”

Kolton, diagnosed on Dec. 8, 2015 recently completed his first round of chemotherapy for T-cell all at Rocky Mountain Children’s Hospital in Denver. Chemo Duck has been a great help since his cancer journey began.

Kolton named his new friend Jumpy and doesn’t go far without him.

“He tells me that Jumpy is his best friend and that he tells his friend all of his problems,” said Amber. “He sleeps with Jumpy, who protects his water bottle at bed time. And he always makes sure we have him packed when we are leaving the house.” 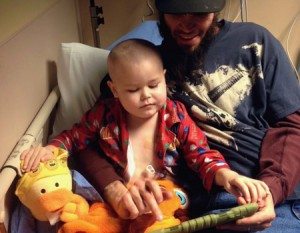 “It’s just so sweet to see him interact with his Chemo Duck,” said Amber. “He has something that is like him. He really relates to him.”

Chemo Duck not only soothes Kolton, but has also provided some smiles for his parents, Amber and Jonathan.

“We are all so happy with how he has reacted to Chemo Duck,” said Amber. “It’s been such a traumatic and stressful time for us and for him to have something to cling onto has really helped his spirits.”