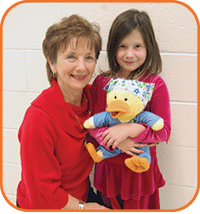 The past three years GreyStone employees have raised more than $11,000 for Gabe’s Chemo Duck Program and have been able to supply two area pediatric cancer programs with enough ducks for the children they serve. Ashley completed her last treatment on New Year’s Eve in 2008  (also the eve of Gabe Sipos’s birthday). Now Ashley is doing well and enjoying fourth grade.