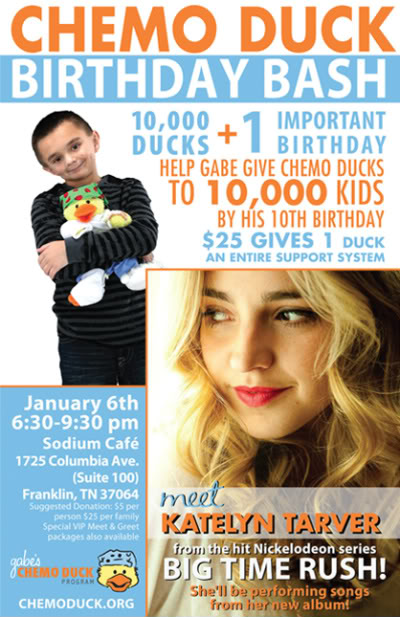 Sponsored by Let it Shine Gymnastics and Applebee’s of Spring Hill, Chemo Duck Birthday Bash will take place at Sodium (1725 Columbia Avenue) from 6:30 p.m.-9:30 p.m. The event will serve as the official kick-off of a year-long campaign to provide 10,000 Chemo Ducks to pediatric cancer patients in 2012. Admission is free, with a suggested donation of $5 per person or $25 per family. All proceeds from the event will be used to place more Chemo Ducks into the hands of young cancer patients waiting for a duck of their own.

Chemo Duck creator Lu Sipos didn’t have to look far to find the inspiration for Gabe’s Chemo Duck Program. She found it in her son, Gabe, who was diagnosed with cancer as a toddler. Now cancer free and turning 10 on January 1st, Gabe fulfilled his dream of becoming an actor last year with his breakout role (“Travis”) opposite Gwyneth Paltrow in the feature film “Country Strong.”

A limited number of V.I.P. Tickets are also available, which include a private Meet & Greet and red carpet photo with Katelyn Tarver, as well as a gift bag that will include autographed CDs from Katelyn Tarver and Charity Vance.

ABOUT GABE’S CHEMO DUCK PROGRAM
Gabe’s Chemo Duck Program is a program of the Nashville-based nonprofit organization, Gabe’s My Heart, which was established in 2004 to provide education and comfort to children living with cancer through medical play using therapeutic tools. The goal of the program is to enable hospital staff and parents to prepare children for chemotherapy treatment and eliminate the fear of the unknown. Chemo Duck is a stuffed yellow duck dressed in blue hospital scrubs with a bandana around its head, a chemotherapy port on its chest and an immobilizer on his arm. In a gentle, age-appropriate manner, children learn what to expect during cancer treatment and have a friend to share the experience. In turn, children can use Chemo Duck to help friends, siblings and classmates to understand and empathize with their experience.