Eli is three years old and has been in the hospital since November 2018 after being diagnosed with Medulloblastoma. He had an emergency surgery when he and his family found out about the mass on his brain. He was rushed to New Orleans Children’s Hospital, where he underwent surgery to have the mass removed. It had been growing since he was just a baby, but he had never experienced any developmental delays and had always been a very independent child.

He went from running in his front yard with his little brother and sister to not being able to walk, eat or talk. 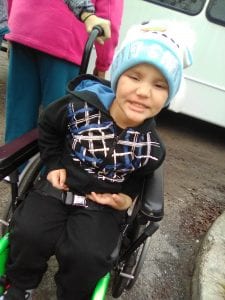 He has completed three weeks of radiation and therapy, as well as two weeks of chemotherapy. He is almost walking again and is getting back to his old self.

One of Eli’s doctors gave him his Chemo Duck when he first received his port. Eli’s Chemo Duck has taught him about his own port and how the medicine works to help him get better.  He loves his Chemo Duck because he has been by his side for most of this journey.

Eli’s family remarked, “It’s amazing how such big changes can happen in such a small window of time.”

Everyone with Gabe’s Chemo Duck Program is sending well wishes to Eli. Thank you to Eli’s mom, Renesmee for sharing Eli’s story with us!